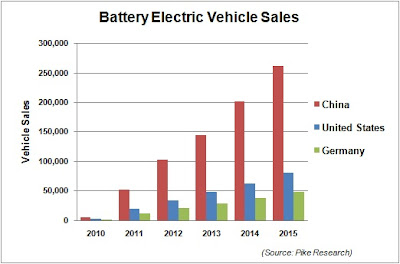 China has promoted Electric Cars to the status of strategic industry, Lithium and Rare Earths are already gaining status of strategic commodities as the base for this new disruptive technology - we will have a far reaching M&A developments from this explosive combination in these very small markets.
"Nothing is changing under the sun in the US Corp. so far - America is under the oil lobby stronghold and if you would like to understand the real situation, just talk to the junior miners in Lithium and REE sectors. Chinese, Koreans and Japanese companies are the only one on the road now, buying all available projects in Lithium and REE space.
Facebook is great, but how are we going to drive in five years time? What are we going to eat for that matter with Oil above 150 dollars again?
There is almost no money available now in U.S. or Canada to advance the Lithium and REE exploration, apart from few names everybody is talking about now. The rest of the sector will be funded by the Asian interest in the end."
"China's commitment to high efficiency vehicles
- Electric vehicles are classified as a "strategic industry" under the twelfth Five-Year plan (2011-15), and parts manufactures will receive tax breaks and subsidies. the government has pledged that it will do whatever is necessary to push Chinese auto industry into the lead on electric vehicles over the next decade.
- Premier Wen Jiabao's choice three years ago for Minister of Science and Technology, WAN Gang, was the first minister in at least three decades who is not a member of the Communist Party, but he is former Audi auto engineer and ex-chief scientist for the Chinese' government research panel on electric cars.
- Senior Chinese officials, including Wan Gang, have outlined China's aim to be the world's largest producer of electric cars within three years, with a near-term goal of producing 500k units in 2011.

- The central government has already pledged about $17B to push the electric vehicle effort, including about $2B for R&D and an $8,800/car subsidy in 26 cities (announced in June). Provincial governments have been encouraged to contribute on top of that.
- The state-owned utilities have been tasked with building out the smart grid and charging infrastructure required for a rapid ramp up in electrics. According to the State Grid Corporation (SGC), which provides about 85% of the country's power, 75 electric charging stations are planned for 27 cities by the end of 2010. The pace will accelerate next year."

Are the days counted for China’s top-down macro economic decisions and for its state-owned monopolies? The next 5-year plan proposed by the Chinese Government focuses its attention on new energy and clean-energy cars. According to China Daily the government intents to ‘speed up new energy development and promote clean and efficient use of traditional energy, develop hydroelectric and nuclear power, and increase strategic oil reserves’.
Alongside new materials, high-end manufacturing, next generation information technology, and biotech,  these industries form part of the “new magic 7″ emerging strategic industries. (The old magic 7 consisted of national defence, telecom, electricity, oil, coal, airlines, and marine shipping.) It appears that the new magic 7 are more focused on bottom-up drivers and allow companies to use their ‘innovation’ process to drive capital allocations.
Ahead of the Chinese party conference, HSBC published a report titled ‘China’s next 5 year plan – what it means for equity markets‘ which investigates the new proposal in some detail. Specifically, the overall objective of the 12th five year plan (2011-2015) lies in the pro-rate increase in domestic demand to total demand and secondly, and as importantly, the overall reduction of the carbon footprint (CO2) by 40%-45% by 2020.

Source: HSBC, China's 12th 5-year plan, New Magic 7
Further, the proposal projects that urbanisation will march on. HSBC estimates that a further 200-300m people could be urbanized over the next 20 years. If the hukou or registration simplification process moves in line with this shift, the projection suggests that consumption should increase significantly. The caveat here is that the property market development should ensure that the property bubble itself can be contained and price movements are more gradual going forward.
More importantly, there appears to be a continued drive to allow private capital to compete in what once were state monopolies or controlled industries. This should be great news for China focused private equity funds. From our view, there are still many low hanging fruits to be harvested by the largest funds in the region, including John Zhao’s Hony Capital for example. The investment pace has slowed a little since 2007 but funds are still putting capital to work. We need to wait and see whether some assets were overpriced and IRRs for Investors will be meaningful. Our views is that funds that put money to work throughout business/ macro cycles will do well for the time being.
We also note the drive to reduce high pollution and high energy consuming industries. For one, any energy price subsidies should be reviewed to allow a ‘fairer’ market price. Regrettably we feel that this process will take longer than currently proposed. We see a risk that some local producers/ polluters input cost competitiveness may be at risk on the global stage. In particular, pharmaceutical, the glass and other high water/power consuming sectors could lose some of their appeal. Can the government afford this – yet?

Source: HSBC, China's 12th 5-year plan, Roadmap
Certainly, the governments objective to double or indeed triple per capita income can only be a welcomed target. With that, domestic consumption levels should raise dramatically allowing for more propensity to consume (let’s hope little will be used for gambling!). Overall, the plan is intriguing and we look forward to seeing particulars.
To sum up, the China Council for International Cooperation on Environment and Development (CCICED) suggests four scenarios for a low carbon economy until 2050. Although not that specific yet, it demonstrates the authorities focus on renewable energy and commitment to cleantech. The four scenarios proposed split into four categories: (i) BaU (business-as-usual) under high growth rate (BaU), (ii) Low Carbon Scenario under high growth rate (HCL), (iii) Enhanced Low Carbon Scenario under high growth rate (HELC), (iv) Low Carbon under high growth rate (LLC). See the link above for more details.

Over the years we have lived a very joyous life of using electricity in our homes and as well as industries which manufacture goods. Some of the main uses are to run heavy factory machines, transportation as in electric trains, domestic use for operating microwaves, television sets, music systems and providing light among other uses. Most of us think that electricity is produced by turbines, windmills, combustion engines, hand crank, compressed air, etc; but in reality the secret lies in the appliance named the electric generator.
hydro electric
hydro electric power
what is hydro electric
inventhistory
power generator
wind power generator
solar and power
electric transportation
Visit the website and get more information => www.inventhistory.com