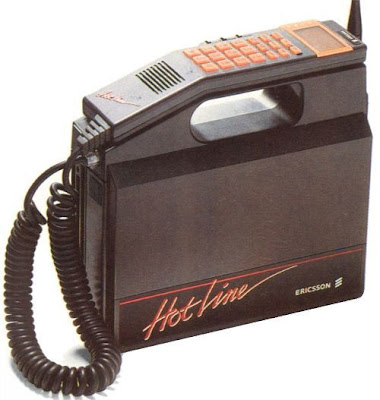 This picture above is the key to understanding of Lithium Bull market and iPod moment with Electric Cars. It is one of the first mobile phones made in early 90s. Technology once on track will deliver a very fast advance, it is cheaper and more productive to invest in development of lithium batteries and Electric Cars, than to clean Oil Spill for years to come. For your imagination: there are estimations that it will cost BP 14 billion dollars to clean up the mess in the Gulf and Nissan with NEC have invested "huge" amount of 5 billion dollars and 16 years into there batteries and Electric Cars program. 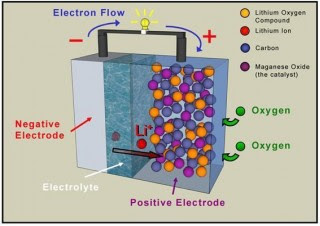 With this technological development Electric Cars can reach the same range as a car with CE, Range Anxiety will not be an issue any more. It will not come tomorrow, but technology could be advanced very fast. We expect for the lithium batteries to deliver within next five years double the capacity with 50% price cut - it will smash any barriers left for the EV mass market. 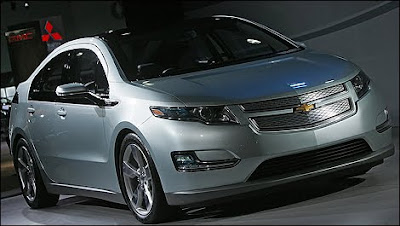 General Motors is quietly conducting research into Lithium-Air batteries, the next Holy Grail of electric vehicle technology, according to a Friday article in The New York Times.
GM acknowledges that while the battery technology has some way to go before it is used in commercial electric cars, the leap in capacity these batteries could offer could yield ranges per charge rivaling that of a conventional petroleum fueled car.
For many years now lithium has played a part in high-density batteries from laptops through to electric cars, but Lithium air batteries have remained less common.
Lithium has an extremely high energy density. If you expose it to water the resulting chemical reaction produces a large amount of heat, lithium hydroxide and hydrogen.
All batteries have an anode and a cathode. Electrical current flows between them when the chemicals inside the battery react with one another. Traditionally, Anode and Cathode have been made from different solid elements.
With Lithium Air batteries, the solid cathode is replaced with oxygen. Since the air we breathe contains oxygen in abundance, a Lithium Air battery does not need to store a supply of oxygen inside itself. This makes the battery much lighter and smaller.
Air has been used in batteries before as a cathode, most noticeably in Zinc-Air batteries, often used as long-life batteries in low power applications such as hearing aids. Traditionally, such batteries could not be recharged and had to be chemically reprocessed to reuse elements of the spent batteries.
In recent years, Zinc Air batteries have been used in electric car tests , including a version of refillable Zinc-Air battery which could be ‘recharged' with fresh Zinc when the battery became depleted.
However, they cannot be recharged in a conventional manner--which Lithium Air batteries can be, just by plugging them in.
Lithium Air batteries could represent an increase of capacity of more 10 times that now achieved by existing lithium-ion cells. This could lead to EVs with ranges in excess of 400 miles per charge--more than many subcompact cars can achieve on a tank of gasoline.
While Lithium Air batteries are at best 10 years away from commercial use, and are still very much in the laboratory stages of testing, they represent a huge shift in potential range for all electric vehicles.
This summer will see GM start testing its plug-in hybrid system in actual Volt GM's 2011 Chevrolet Volt will be launched this fall and uses more common Lithium Ion cells in its battery pack. The extended-range electric vehicle will be capable of traveling 40 miles on a full charge of electricity before a gasoline range-extender engine kicks in for another 300 miles.
[The New York Times]"
Posted by Unknown at 11:04 AM