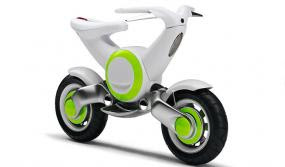 We have a report from Pike Research about new potential market for the lithium batteries in North America and Europe. Electric Bikes are already a very fast growing business in China and rest of the Asia is waking up to this idea as well. The main drivers there are the expensive fuel and very cheap home-made electric bikes. Technology and safety is getting better in Asia and now major motor and auto makers are announcing electric scooters and bikes for the Western market as well. 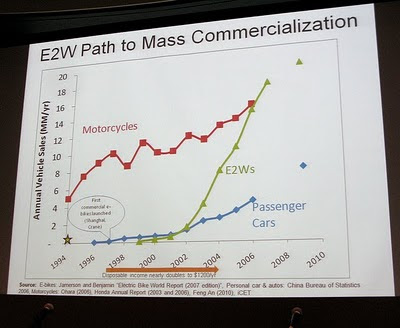 PikeResearch:
Annual Sales of Electric Motorcycles and Scooters to Increase Sharply in North America and Europe
While two-wheeled transport remains the primary means of transport for millions of people in China and other parts of Asia Pacific, most consumers in North America and Europe have remained committed to their passenger cars. Now, however, high petroleum costs, improved customer perception, and government incentives are all contributing to a growing demand for motorcycles and scooters – including those powered by electricity. Particularly in areas where the population is increasingly moving into cities, where large vehicles are often impractical and expensive to own, operate, and park, density has become a driving force for the e-motorcycle and e-scooter markets. According to a recent report from Pike Research, sales of these vehicles will rise sharply in Europe and North America over the next six years.
In Western Europe, for example, annual sales of e-motorcycles will essentially double each year through 2017, the cleantech intelligence firm says, with some countries, such as Italy and France, seeing compound annual growth rates (CAGRs) of greater than 120%. The nations of Eastern Europe will see even more explosive growth, with e-motorcycle sales increasing by 138% annually from 2011 through 2017. CAGRs for e-motorcycles in North America will surpass 71%.
“For now, sales numbers are low, but manufacturers of two-wheeled electric vehicles are finding specialty niches that will provide solid growth early on in the next decade,” says senior analyst Dave Hurst. “E-scooters, for example, are effective for small parcel deliveries, while police forces are gravitating toward e-motorcycles to save money on fuel.”
By far the largest market for e-motorcycles and e-scooters is China, where Pike Research forecasts that 2.3 million and 13.5 million vehicles, respectively, will be sold by 2017. This growth is driven by the huge existing market for two-wheeled vehicles and by the fact that many e-scooters are sold as bicycles, so they do not have to be registered. China, however, is a relatively mature market; the CAGR for e-motorcycle sales through 2017 will be under 2% and, for e-scooters, under 5%.
The total number of e-motorcycles and e-scooters on the road, worldwide, will increase from 17 million in 2011 to 138 million by 2017.
Pike Research’s study, “Electric Motorcycles and Scooters”, provides a comprehensive examination of the market forces, technology issues, government incentives and regulations, and key drivers of the growth of e-motorcycles and e-scooters. The report includes e-motorcycle and e-scooter sales forecasts and battery technology forecasts through 2017, as well as profiles of key industry players. An Executive Summary of the report is available for free download on the firm’s website.
Pike Research is a market research and consulting firm that provides in-depth analysis of global clean technology markets. The company’s research methodology combines supply-side industry analysis, end-user primary research and demand assessment, and deep examination of technology trends to provide a comprehensive view of the Smart Energy, Smart Grid, Smart Transportation, Smart Industry, and Smart Buildings sectors. For more information, visit www.pikeresearch.com or call +1.303.997.7609."

Comments
"In 20 years, all cars on the road