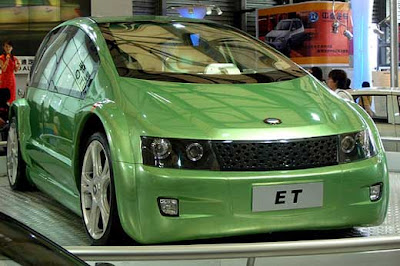 China has a very high ambitions in electric car space. Among advantages are relatively cheap qualified working force of literally thousand engineers devoted to Lithium ion batteries and Electric Cars in BYD alone. It is not a surprise that Chinese companies are so active in Australia securing supply of Lithium, whether they will be coming after Japanese companies to Argentina, Nevada and Canada we will see in the nearest future.
"We have now a Chinese perspective on the potential for the market for Electric cars, China' ambitions and its clear understanding of Lithium as a strategic commodity for ongoing Green Mobility Revolution. They are talking about the same "Golden Triangle" of Lithium as Rick Mills did in his recent report and Lithium ABCs:"

"Electric cars to get a lift up from new policy measures

The green auto plan, currently awaiting government approval, is expected by industry players to be unveiled in the next couple of months.

According to the plan, electric cars that qualify for subsidies are those that have received government's production license and are assembled in China, regardless of whether made by domestic or joint-venture firms.

The industry sources said that imported electric cars would have little hope of benefiting from the policy in the initial stages.

Miao Wei, vice-minister of the Ministry of Industry and Information Technology has said the government planned to launch the incentives for private purchases of new energy vehicles in March. However, the plan has since been postponed.

Zero emission pure electric cars would be the preferred technological paths for new energy cars in China, which would be reflected in the stimulus plan, said sources. Other technical options include hybrid, fuel cells and hydrogen fuel new energy vehicles.

"The government's stimulus policy, which will be released soon, will focus mainly on promotion of pure electric cars," said Xu Changming, a senior economist of State Information Center, a thinktank under the National Development and Reform Commission.

Pure electric cars could eliminate dependence on oil and provide an opportunity for Chinese automakers to catch up with global carmakers, which already have a head start in the electric car market. For other technologies such as hybrid, Xu said it still requires advanced engine and transmission technologies, but such advancements are lagging behind at the moment.

China's roadmap for new energy cars for current period is "giving priority to pure electric cars, and taking hybrid cars as complement", said Zhang Jinhua, vice-secretary general of China's Society of Automotive Engineer, who is also an official for the national 863 research program on energy saving and new energy vehicles.

Fuel cell and hybrid vehicles were targeted as the priority for new energy vehicle development in China's 11th Five Year Plan (2005-10), but the authority's mainstream opinion has shifted to cars powered by pure electricity, and hybrid and fuel cell technologies would mainly be applied on commercial vehicles, said analysts.

"The contest for new energy vehicles will last for decades and which technology path would prevail in the competition is up to market forces," Liao said.

The first round of competition for the electric cars market share would mainly be between medium and small-sized domestic, private automakers, as large State-owned domestic automakers have acted sluggishly in the electric car research and development.

A batch of pure electric cars has rolled-off from the assembly lines at BYD, Chery, ChangAn and Zotye. BYD Auto launched its plug-in hybrid car F3DM at the end of March and tiny Zhejiang-based Zotye Auto launched its 2008 EV in January.

"Big State-owned automakers didn't take the development of electric cars seriously five years ago and now they are feeling the sense of urgency as the smaller rivals have marched in advance," said Wang Zhenpo, an associate professor at the electric vehicle center of Beijing Institute of Technology."

I visited this blog first time and found it very interesting and informative.. Keep up the good work thanks..